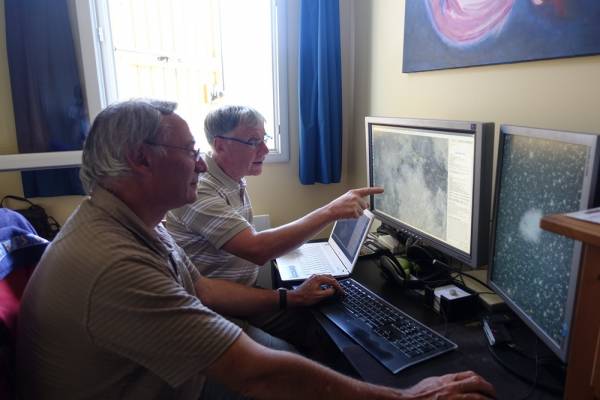 Who is behind the Atlas? Quite simply two friends passionate about astronomy each in a very specific field (The study of the Moon for one and astronomical computer programming for the other) whose meeting, thanks to the Internet, allowed the realization of this tool.

It was also made available to observers around the world thanks to numerous volunteer translators who must also be thanked for their personal work.

At the origin of the realization of the “Virtual Atlas of the Moon”, Christian Legrand is an experienced Moon observer, passionate about exploring our satellite.

As early as 1995, he had produced and disseminated the first database of lunar formations, which already included management software called “DB-LUNE” and was illustrated with images by Etienne Lecoq.

In 2000, he co-wrote with Jean Lacroux “Discover the Moon”, a guide published by BORDAS, translated into German, Spanish and English.

He set up the Blog “Lunar image of the day (ILUJ)” and presented there from 2006 to 2008 the French translation of pages from Charles Wood's “Lunar Picture of the day” (LPOD) site. This translation was then resumed by Jocelyn Sérot, but is currently stopped.

He was columnist for the magazines “Eclipse Magazine” and “Espace Magazine” (for which he was in charge of the “Lunar Tourism” section) until their publication stop.

He is now a columnist for the magazine “Astrosurf Magazine” where he has two headings: “The Essentials of Astronomy” and “Extreme Moon”.

Since 2014, he is also founder and manager of “Destination Univers” - http://www.ap-i.net/destiunivers/ - a micro-enterprise for the realization of astronomical lectures and public sessions of observation of the sky.

With regard to the “Virtual Moon Atlas”, Christian Legrand is in charge of:

- The general design and evolution of the atlas
- Searching and entering information from databases
- The research of maps and textures and their preliminary treatment
- Research, choice and final processing of images for the photo library
- Research, choice and final treatment of scientific layers
- Obtaining the necessary authorizations
- Contacts with professionals
- Writing documentation and some of web pages
- Response to emails relating to the database or photo library
- Management, recording and sending of SD cards

In his professional life, Christian Legrand is a retired public service engineer.

Born in 1953, he is married and has two children. He lives in France in Normandy

In fact, he started programming this type of software in 1984 on a computer.
Without its skills and talents as a programmer and its knowledge of the Web, VMA would never have been produced.

Regarding the “Virtual Moon Atlas”, Patrick Chevalley is in charge of:

- The software interface design
- Software programming
- Adaptation of textures and layers to the graphics engine of the software
- Contacts with translators and translation management
- Writing some of web pages
- Website and discussion forum management
- Response to letters relating to the program.

In his professional life, Patrick Chevalley is a retired computer engineer of the city of Geneva.

Born in 1958, he is married and has two children. He lives in France in the Gard.

For the Dutchman: Huub Scheenen

For the Czech: Jiri Jozif