Already downloaded over 1 million 800,000 times worldwide. Used in several books, foreign observatories, by CNRS research professors, websites, TV shows, astronomical magazines and to prepare the Chandraayan 1 lunar mission. Used by the European Space Agency (ESA) in the framework of the NELIOTA program. Recommended by the French Ministry of National Education.

For Windows Seven to Windows 10

This program can also work under Linux with Wine and on MacOs with Wine, Parallels or CrossOver. 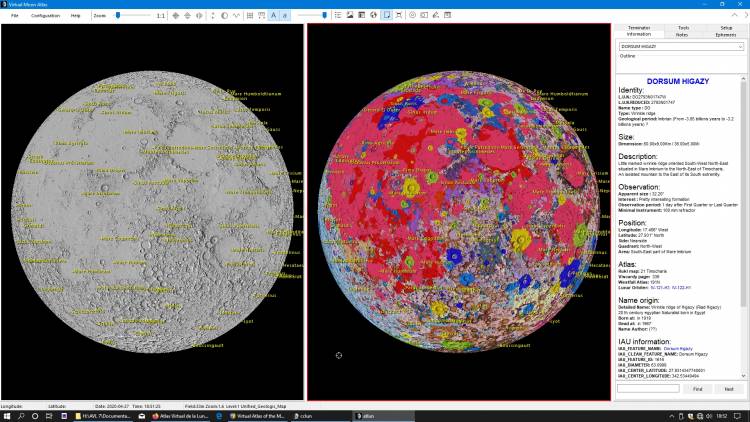 In 2002 appeared the first version of VMA. For its eighteenth anniversary, we are pleased to present the new version 7.0, the most complete computer-based atlas of the Moon existing.
Since 2012, the launch date of version 6.0, we have been waiting for data from the recent Chandrayann 1 and GRAIL lunar probes as well as new, more precise data from the venerable Kaguya and LRO probes in order to make them compatible with VMA. It is now done and we also took advantage of this long absence to increase the VMA databases because new data were provided by several scientific organizations.

We hope all of this will make your observations and studies of the Moon even more exciting.

September 2020 : VMA 7 is presented during the virtual EPSC 2020
You can find the official abstract presenting VMA 7 to EPSC participants at
https://meetingorganizer.copernicus.org/EPSC2020/poster_presentations_and_abstracts/38432

September 2020 : New SMART-1 Pictures library
We have begun to extract formations pictures from the “Planetary Science Archive” dedicated to the european lunar probe Smart-1 which was on lunar orbit from 2003 to 2006. Many pictures are about polar formations that have not been often imaged. This Smart-1 pictures library is now included in the “virtualmoon-data.exe” installer. The VMA 7 documentation has been updated with this add-on.

Improvement of the “ATLUN” © module on five points:

The level 6 “LRO / Lunar Reconnaissance Orbiter” photographic texture:
Lunar Reconnaissance Orbiter, currently in lunar orbit, transmits images of the lunar surface reaching a resolution of 1 m. As full coverage at a given resolution progresses, Mark Robinson of Arizona State University and his LRO team publish new global maps of the Moon. The one we are introducing today in the VMA corresponds to the highest resolution available to date. It reaches a resolution of 56 m.

The reconstructed texture “LOLA-Kaguya-Shaded”
Mosaic of the original images of the Lunar Reconnaissance Orbiter (USA) and Kaguya (Japan) probes assembled from USGS data. This texture has a variable resolution reaching 60 m / pixel in the best places. It is a “texture with shaded relief”. It is not a photograph because it was established by computer from the altimetric data collected by the two probes to create a DEM (Digital Elevation Model). The initial texture only includes the zones between -60 ° and + 60 ° latitude and the polar zones have been reconstructed from other LRO data.

The “Clementine negative” texture:
It is a black and white albedo texture, but the gray levels are reversed as in a photo negative. This particularly highlights the ejecta from recent craters.

The texture “LAC / LPI / O’Brien”
David O’Brien of the Planetary Science Institute (PSI) has realized a texture with the “Lunar Astronautical Charts” (LAC) drawn on 1965 by the United States Air Force (USAF) and published by the Lunar and Planetary Institute. We thank a lot David and the LPI for giving us the authorization tu use them in VMA.

All these textures complement each other because the lighting conditions of each texture change, thus showing different details for each of the formations.

The new “HISTORICAL TEXTURES”:
We have collected and processed the best digitized versions of old lunar maps that have fallen into the public domain. You can now compare the work of these pioneers of lunar exploration with current data. These maps obviously only show the Visible Face of the Moon and there are sometimes significant differences in the position of the formations, although these are becoming more and more reduced with the last two proposed: 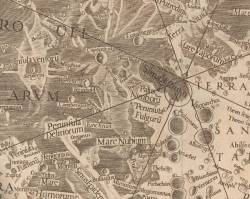 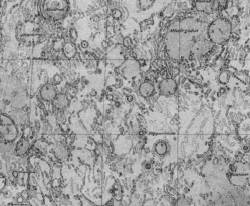 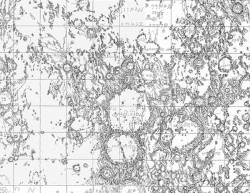 NEW SCIENTIFIC LAYERS:
We have recovered and treated 5 new “scientific” layers to study the lunar surface:

NEW DATABASES:
We have converted 3 new databases to the VMA databases format

NEW IMAGE LIBRARY:
“Best of Cathala” image library:
Luc Cathala is one of the best lunar imagers in France using a 625 mm diameter Dobsonian of personal production. With a QHYSIII178M camera, he takes pictures sometimes reaching a resolution of 300 m. He gave us permission to build a “Best of Cathala” image library with his production. We have therefore produced what is becoming the largest of the VMA amateur image libraries containing 679 training images under different lighting. Another big thank you to Luc for sharing his remarkable work!

NEW DOCUMENTATION:
The general documentation of VMA 7.0:
We have updated the illustrated documentation of the VMA with screenshots and photos in situation showing the new possibilities offered by this new version 7. This documentation now also exists in PDF format.

NEW DISTRIBUTION:
VMA 7.0 SD distribution cards:
In order to make this new version available for those who do not have a high speed Internet connection to download it (8 GB with modules, textures, scientific layers, image libraries), or for those who wish to support our action, we are now editing an SD distribution card that installs the entire VMA version 7.0 (Command Center, ATLUN ©, PHOTLUN ©, DATLUN ©, WEBLUN ©, databases, “high resolution” textures, dynamic shadows directly on the PC. “Low resolution”, scientific layers and public domain image libraries).

MAC AND LINUX SUPPORT:
Unfortunately, we had to stop distributing the Mac and Linux versions due to incompatibilities with OpenGL on the latest versions of these systems which prevent the display of the Moon.
The best solution is to install the Windows version with Wine. Wine is a collection of free libraries for executing a program intended for Windows.
If you want to try to find a solution it is still possible to compile the program code on Mac or Linux.

Do you wish to support us ?

Many users have asked us how they can support our work. First of all, remember that it remains above all voluntary and free and we are not asking for any financial aid for this action which only reflects our respective astronomical passions: study of the Moon for Christian Legrand and astronomical programming for Patrick Chevalley.

Clearly, this production requires costly periodic upgrading of the computers and software we use.

To meet your wishes, we felt that we could not refuse voluntary donations. If you wish to be at the origin of such a donation, go to the page "How to make a donation?" For more details. So that the benefit of your support comes back to you anyway, we will allocate these funds as much as possible to the purchase of computer and/or astronomical material or library resources usable for the improvement of VMA or the realization other astronomical products or actions for amateur astronomers (Books, other software, conference equipment, observation and shooting equipment, etc.).

And to support us, you can also acquire the SD card.

We thank you in advance for your support.

Description of the program

This program carried out by Patrick Chevalley and Christian Legrand makes it possible to visualize the appearance of the Moon for any date and time, to pilot telescopes with computerized mounts on the Moon and to study in detail the lunar formations using a database of over a million entries and a strong image library of nearly 9,000 photos compiled by Christian Legrand.

It is designed to be easy to use and in particular “in the field” according to the particular needs of an observation, but also to be able to study “in the room” the Moon and its relief. It is interfaced with “Cartes du Ciel” freeware developed by Patrick Chevalley. This set is undoubtedly one of the most complete sets on the market. Note also that the VMA is entirely “autonomous” and does not require an Internet connection for its operation.

Better than a long description, we invite you to look at the screenshots and to browse the manual, also in PDF format and the quick guide to get a more precise idea of ​​its possibilities.

This program was designed according to the needs of the majority of Moon observers. But it is also thought to be a tool for people interested in selenography on a personal or professional basis.

The authors are determined to constantly evolve it towards new functionalities. However, if you think it lacks a useful function for everyone, please let us know. It may be possible to add it in a future version, if it has not been planned and if the software structure allows it.

It is possible to choose the language used by the program. Currently 2 languages ​​are available in the basic version: French and English. We maintain an English version to benefit American amateur astronomers because the majority of the data used in the VMA is American. Other translations can be downloaded.

The authors hope that other passionate amateurs will volunteer for translation into their own language in order to make this program accessible to amateurs around the world.

Why is it free?
This program was born from the collaboration between Christian Legrand, passionate about lunar observation, co-author of the guide "Discover the Moon" published in French by Larousse, but also in English, German and Spanish, with Patrick Chevalley, author of the free planetarium "Skychart" worldwide appreciated.

The authors make it available free of charge to the general public, amateur astronomers observers or photographers of the Moon, students to approach selenography and professional astronomers. They thus hope to promote observation and knowledge of our satellite, which remains one of the next steps in human space exploration.

Textures, scientific layers, database information and images are subject to external copyrights and can only be used with the Virtual Moon Atlas, the authors of which have obtained authorizations for use.

This program is entirely written with Lazarus.

Source code is available from https://github.com/pchev/virtualmoon

The calculations of the ephemeris of the Moon use the JPL ephemeris. The ephemeris DE421 is included with the program.

Many calculations are based on the essential “Astronomical Algorithms by Jean Meeus”.

The database is managed with SQLite and Libsql.

For all question about Virtual Moon Atlas usage please use the user forum.
To report a problem with the software please use the bug tracker page, then check if a similar problem is already described.

If you have any questions, suggestions or remarks about the software, you can contact Patrick Chevalley.

If they are about the overlays, the databases or the pictures libraries, please contact Christian Legrand.